Trick questions to test your mind 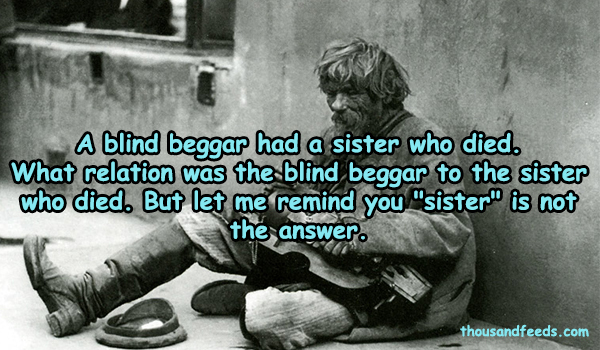 1. Two boys were born on the same time, in the same day, in the same year and to the same mother? How is that possible if they are not twins?

3. A truck driver was going down a one-way street even though it was written no-entry for vehicles. Even though the traffic policemen saw but they didn’t do anything about it. Why so?

4. There was a plane crash in Korea every single person died. Two people survived. How can these two statements go together and still makes sense?

5. While reading the newspaper I found a situation of a  plane crash on the boarders of North Korea and South Korea. Now question is where do you think the survivors of the crash be buried?

1. because they were part of triplets (hence not twins)

2. The blind beggar was the brother of his sister, who died. (the gender of the beggar was not mentioned.)

3. The traffic police didn’t do anything because he wasn’t driving the truck but just walking down the footpath.

4. The two people that survived were married hence they don’t come in the category of “single”.

5. Its so simple why would the survivors be buried- they survived isn’t it?

6. Both are of the same weight, both are one kilogram so answer is neither.

I hope that this post helped you to think a little harder than usual and  you enjoyed the trick questions. Please leave behind your valuable comments below. For more such brain teasers check this link

« Poem on failures ,the world today: Broken angel What does "CAM" mean in association football? »
comments powered by Disqus